In 1946, the Chief of Naval Operations, Admiral Chester Nimitz, had a vision to create a flight exhibition team to raise the public’s interest in naval aviation and boost Navy morale.

The Grumman F6F-5 Hellcat is powered by a Pratt & Whitney R-2800 Double Wasp 18-cylinder radial engine, which produces 2,000 horsepower. The Hellcat is a large aircraft weighing in at over 12,000 pounds fully loaded and has a top speed of 440 knots.

During an air show at Omaha, Nebraska just a month later in July 1946, the Navy Flight Exhibition Team was introduced as the Blue Angels. The name originated through a suggestion by Right Wing Pilot Lt. Maurice “Wick” Wickendoll, after he read about the Blue Angel nightclub in The New Yorker magazine.

After only ten appearances the Hellcats were replaced by the lighter, faster, and more powerful F8F-1 Bearcats in August 1946. By the end of the year, the Blue Angels consisted of four Bearcats numbered 1-4 on the tail sections. (They wouldn’t get to six jets until 1949) The Bearcat had outstanding performance and was the last of the Navy piston-engined fighters.

The Grumman F-8F Bearcat is powered by a Pratt & Whitney R-2800 Double Wasp 18-cylinder radial engine, producing 2,250 horsepower, is a smaller aircraft, weighing in at 9,000 pounds fully loaded.  It was the first Navy fighter with a bubble canopy and has a top speed of over 450 knots. 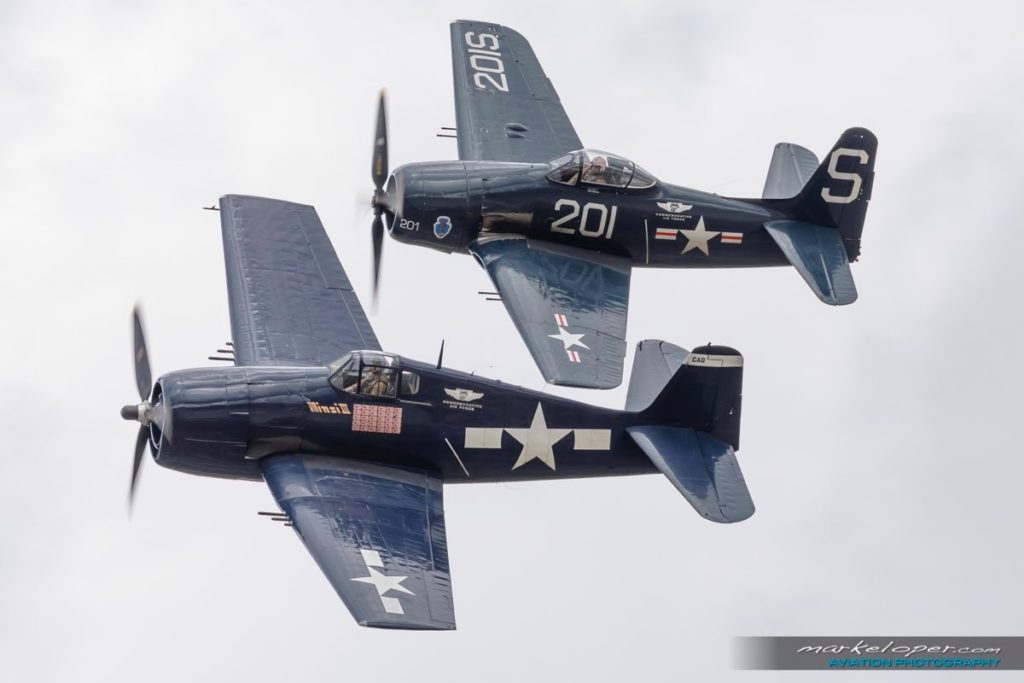 Throughout the years the Blue Angels have performed for crowds across the globe in 8 different aircraft, but only two of them have been piston-engined, propeller driven aircraft, the rare and now priceless Hellcat and Bearcat!

With help from the Southern California Commemorative Air Force (SoCal CAF), the California Capital Airshow will honor the Blue Angels’ 73 years of aviation excellence with a special tribute performance by the Grumman Hellcat and Bearcat on October 5 & 6 – don’t miss it!!

Based out of Camarillo, California, SoCal CAF is a nonprofit organization whose mission is to honor American military aviation through flight, exhibition and remembrance. More than just a collection of airworthy warplanes from the past, the CAF’s fleet of historic aircraft, remind and reinforce the lessons learned from the defining moments in American military aviation history.

We’re kicking off Airshow weekend with a bang! Don’t miss ‘Blues & Brews’, a FREE performer meet and greet, on Friday, October 4th from 6-9pm at Mather Jet Center’s Hangar 1. Fans are encouraged to come out and meet the US Navy Blue Angels and other Airshow performers, listen to high-energy live music by the US Navy ‘Destroyers’, purchase unique & tasty fare from Sacto MoFo trucks, play a lively game of Corn Hole, explore a handful of awesome display aircraft, and taste some of the region’s best beer & spirits at our 1st-EVER BREW FEST (ticket required), and so much more!
Check out all of the details and purchase Beer Fest tickets HERE