Buckle up because you’ll be accelerating almost to the speed of sound in today’s double feature! First up … SHOCKWAVE! 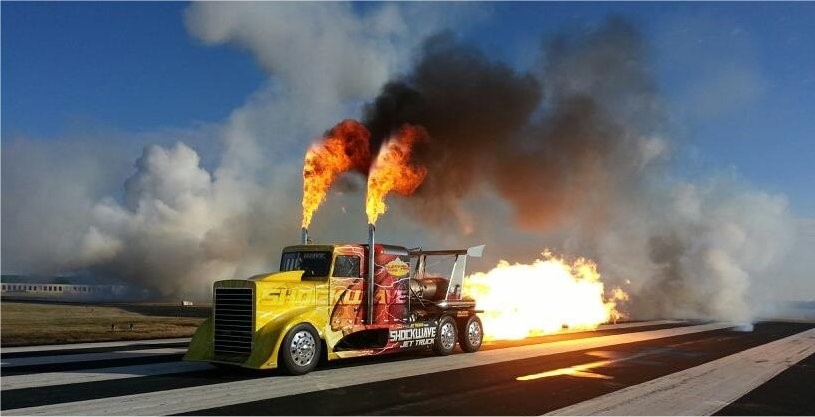 Imagine a semi-truck speeding down an open runway…racing an airplane. Who wins? When the truck is propelled by 3 jet engines with 21,000 pounds of thrust at a speed over 350 miles per hour, it could be a close call!

Shockwave is a custom built race truck equipped with 3 huge J34-48 Pratt & Whitney Jet Engines originally out of the USA Navy T-2 Buckeye. The jet engines have a combined 36,000-horsepower! 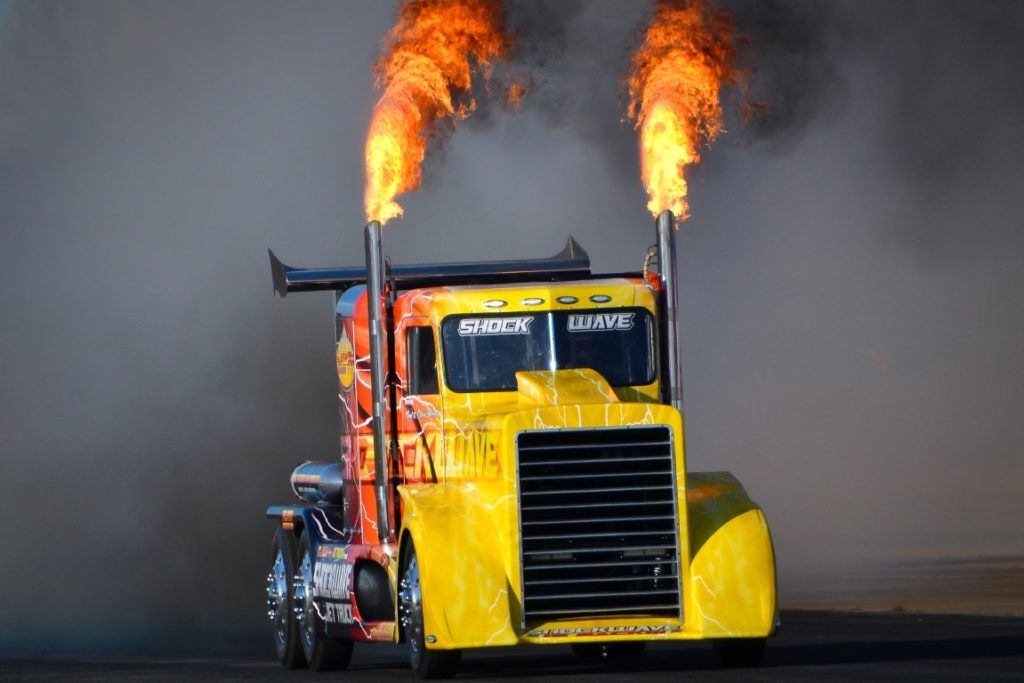 Shockwave is not only the most powerful truck in the world, it also holds the record speed for semi-trucks at 376 mph! As one of the most popular air show vehicles in the world, the Shockwave performance is not something you will soon forget! You will feel and hear the thunderous crack/thud of its afterburner just before driver Chris Darnell screams down the runway. This will be accompanied by lots of smoke and even more noise! So buckle up and get your cameras ready for a sight to behold! 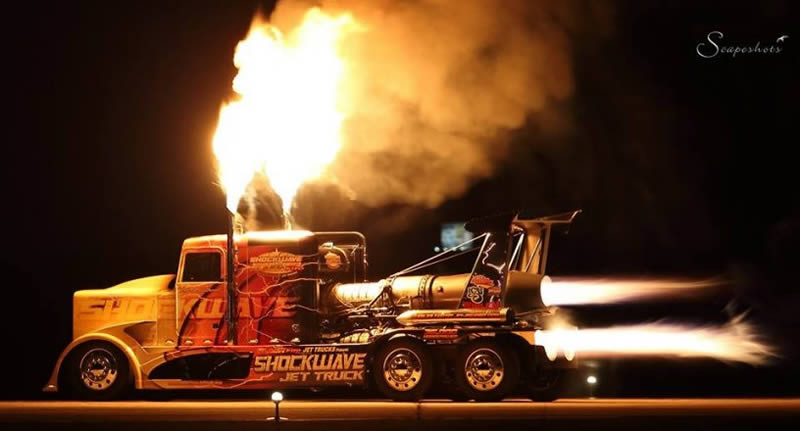 Shockwave Blasts into Friday Night!
You won’t want to miss Shockwave’s night show performance as it lights up the darkness with flames, thunderous noise and a flash of speed that will jolt your senses! (Friday Night – September 21st ONLY!)

The Canadians Return with Some Serious “Turn & Burn!”

Back in March, we announced the Canadian CF-18 Hornet Demo Team’s return to Sacramento. At the time, we only had a graphic rendering of the jet’s paint scheme. With Canada Day (July 1st) almost upon us, we thought we’d share these updated pictures of the jet in flight! 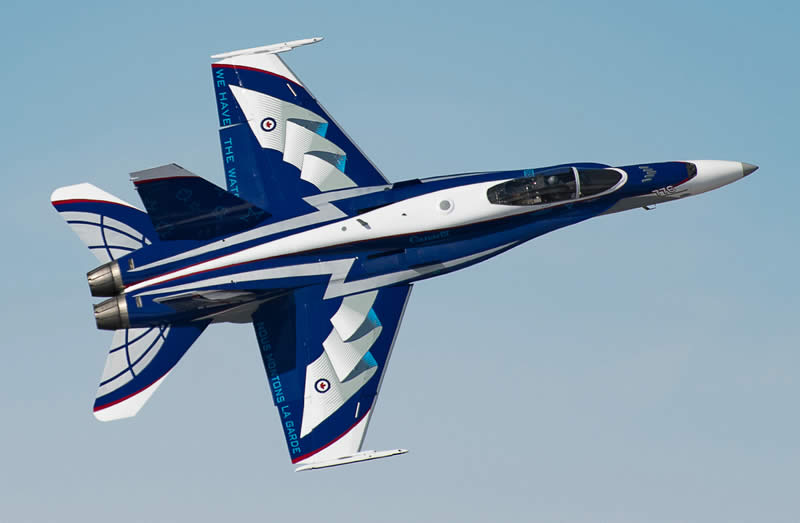 Our Canadian friends fly a very distinct demonstration with a one-of-a-kind paint job. Having seen this demo evolve over the last 15 years, I can tell you with confidence that you’re in for a full-tilt treat – just check out that paint job!

This year’s design commemorates 60 years of the North American Aerospace Defense Command. The design includes elements from NORAD’s logo – lightning bolts, a north-pointing sword, the globe, and silver stylized wings that evoke both the northern lights and radar sweeps. The motif is undeniably symbolic of NORAD’s ongoing commitment to the protection and defense of North American airspace, and the RCAF’s (Royal Canadian Air Force) role in guaranteeing Canadian sovereignty. The CF-18 Demo team is looking forward to showcasing 60 years of Canada and the United States sharing “the watch” through NORAD.

Pilot, Captain Stefan Porteous, will wow audiences in this of-a-kind CF-18 throughout North America during the 2018 air show season. 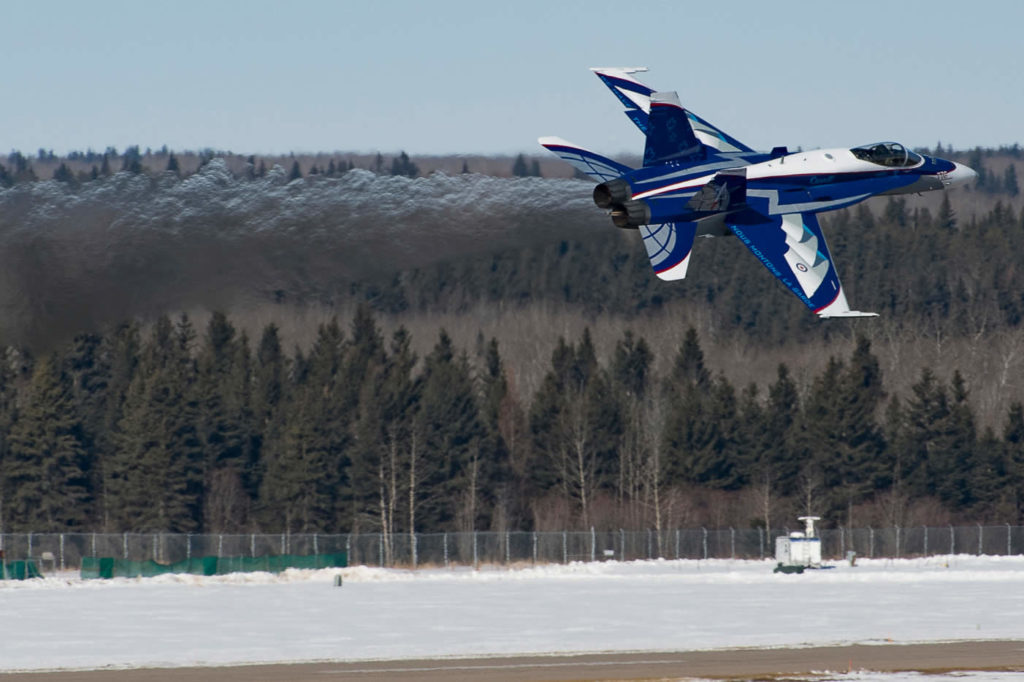 (Fear NOT! We can Guarantee NO SNOW in September!)
A versatile, world-class fighter aircraft, the supersonic CF-188 Hornet, or CF-18 as it is popularly known, can engage both ground and aerial targets. Its twin engines generate enough thrust to lift 24 full-size pick-up trucks off the ground! As the RCAF’s frontline multi-role fighter, the modernized CF-18 is used for air defense, air superiority, tactical support, training, aerobatic demonstration, and aerospace testing and evaluation.

RCAF personnel and aircraft have more than proven that they can fight alongside our Allies — they are battle hardened, and the capabilities of the CF-18s today certainly enable them to effectively serve alongside fighter aircraft being flown by its NATO Allies.