With war once again raging in Europe and tensions rising in the Pacific Theater, America realized the need to bolster its defense and to be ready to join the Allied Forces if called upon. To that end, communities across the nation mobilized resources and capabilities to meet the call to arms. 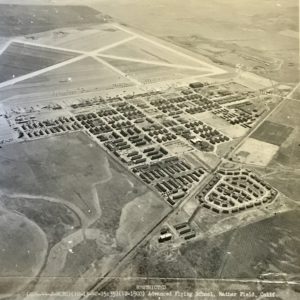 In 1941, thanks to the Sacramento Chamber of Commerce, Mather Field was re-designated as a military training base for the Army Air Corps. A $4-million refit began when 1,700 workers, representing 13 Sacramento contractors, took to the sleepy town. The airfield property was expanded from its initial 872 acres to more than 4,400 acres. This major expansion included a $1.3M contract to A. Teichert & Company to prepare the land for the new facilities and construct a massive new concrete runway. In three months’ time, 40 buildings comprised of 8.43 million feet of lumber were completed.

With construction in full swing in June 1941, Mather accepted its first class of World War II-era cadets to train for combat duty with the Army Corps. The cadets’ facilities were rustic, at best. They were housed in tents and dined together in makeshift mess halls. To provide comfort, Sacramento housewives often left fresh baked goods at KFBK radio for Mather’s residents. In the fall of 1941, the newly constructed Mather was formally inaugurated and its first class of navigators graduated.

Hundreds of Aircraft Prepare for Takeoff 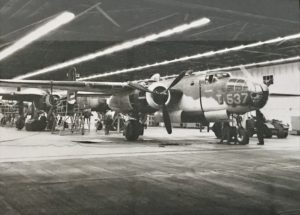 With confidence growing for an Allied victory in World War II, Mather’s training activities were terminated in 1944 and the base became a major port of embarkation for troops and aircraft destined for the Pacific. By June of 1945, 234 B-29 Superfortresses and over 200 other combat aircraft, including the B-25 Mitchell, B-17 Flying Fortress, AT-6 Texan, C-47 Skytrain, C-46 Commando and many more, had been processed through Mather enroute to the Pacific and ultimate victory.

A Return to Peace

A hearty “Welcome Home – Well Done” greeted servicemen returning from the Pacific as Mather became the terminus for servicemen and aircraft transitioning home. Between early October and mid-November 1945, the Sunset project returned 1,266 planes and 17,534 crew members stateside. As peacetime began, Mather Field again was designated as a training base and assigned to the Air Training Command, where training of navigators became its specialty for decades to come. 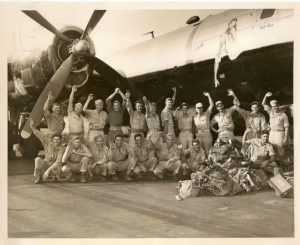 Honoring the Past and Present

The California Capital Airshow will be honoring World War II and those who served this September with the aircraft, artifacts and unsung heroes of this era. Stay tuned for the next chapter of Mather’s magnificent history.

Just in case you missed Part I of Mather Airport’s 100 Year Adventure, here it is: